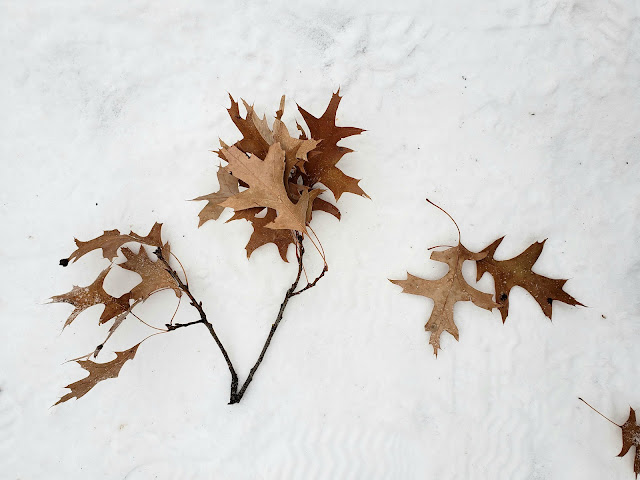 Today we went on our first hike of the year.  Two and a half miles at 23 degrees on snow-packed trail in the nearby state park.

Later I sat on the couch, journal in my lap, and attempted to sketch from a photograph, dry oak leaves that we passed on the trail.  Leaves are formed in symmetrical shapes until I set about to draw one.   At which time I encounter the uncomfortable meeting of my expectation and reality.  I can not draw what I see, what the world created, without releasing my contrived perception of the world.  For a while, as I sketch I struggle between the shapes I see and the ones my mind is trying to transfer onto paper.  When I finally let go I create something in between - it is neither what I believed I would see nor what the world made.  It is something new, an idea in pencil on paper, that captures the essence of my encounter with the natural world.  I will never draw a leaf that looks like a leaf  but trying has taught me a little bit more about looking and seeing and being.