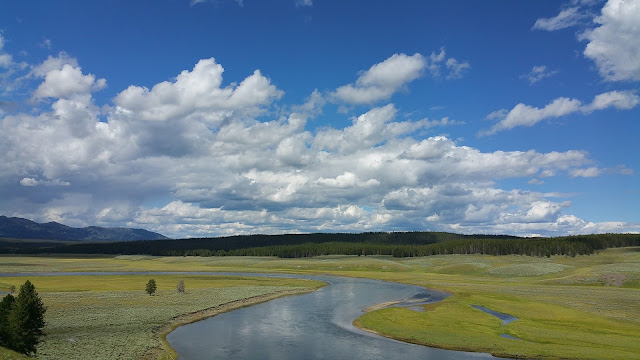 For me, Yellowstone was to be the capstone of our trip. This place had been a legend since childhood, it was about to be made real.

Little more than a year ago, we began conjuring the idea of a ‘big trip’ as our kids would come to call it, the following summer.  The original idea was simply to drive to Oregon where I grew up, have a family visit and stop at a few interesting places along the way.  And then I realized that Yellowstone was along the way.  It would finally come true, the dream of childhood, we would go.  And now I would get to take my own children, something that seemed a solid reflection of life’s perfect poetry.

Yellowstone was introduced to me as a young child through the works of Frances Joyce Farnsworth who wrote two books about a young bear cub who visits the park and experiences its vast and amazing wonders with his mother; Cubby in Wonderland (1932) and Cubby Returns (1935); and a third Tike and Tiny in the Tetons (1954) about the same ‘Mommy Bear’ who later takes her twin cubs on a tour through Grand Teton National Park.  Farnsworth was a Wyoming author and possibly a school teacher who lived, 1881 to 1962.  She also wrote a number of other books about adventurous animal characters.  Little else about her life and work is readily available even though a fairly extensive online search.  She is now on my research list.

Perhaps I want to know who she was because of how profoundly she influenced my consciousness, creating a resting place in my mind, one distantly awe inspiring and yet wholly attainable.  She did not create in her pages a wonderland that I could merely dream about, but gave me access to one that was distinctly real and reachable.  She in a sense gave me my first goal, some way of understanding how to reach beyond myself, that the world was big and beautiful and awaiting me.

She came to me through the hands and voice of my mother who read her words to me and my grandmother who had read them to my mother.  Passed along with a kind of awe that I am sure Farnsworth intended and hoped for.

And so when I realized that we could indeed plan our route to take us through Yellowstone there was no doubt we were going.  As it would turn out our visit to Yellowstone would be less of a capstone than I had believed it would be; not because of any disappointment in that place but because of the general wonder in all places its mythology had helped to create.

But when we left at about 8:30 in the morning on July 7th Yellowstone was, in my mind, our only significant destination.